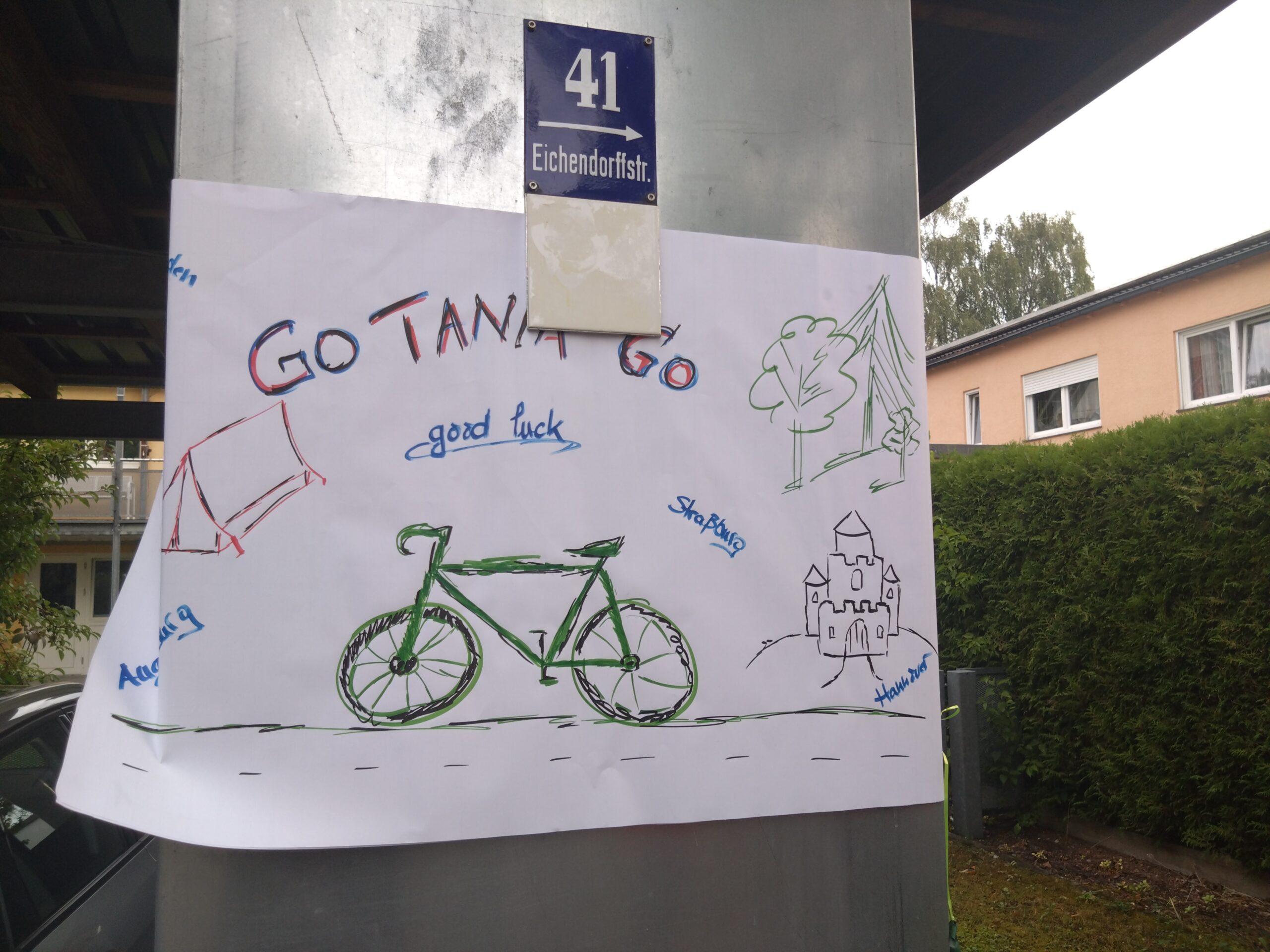 What a send-off! Of course my family was up and about to say good-bye, but two colleagues (Gerlinde and Susanna) also came armed with a poster, and then five people from the local cycling club came along for part of the ride, as well! Wow, I am still overwhelmed!

Today was also the day a long article about my endeavour was published. It captures very well, what I am setting out to do.

As the last few days at work had been busier than I had hoped, I had to get up early to finish preparations, I now hope I have everything necessary with me. The weather forecast for at least this first week is pretty good. As Phil cycled all the way to Augsburg with me I could cheat a bit: he carried all the food this first day.

We set off at exactly 8:00, as planned, and cycled to Munich to start the official Munich to Augsburg bike route at the Isar. Luckily it was Saturday morning, Munich was not quite as busy as usual, and we had time to admire a short bit of newly constructed bike path and circumvent all the road works. As we left the city we came past Blutenburg, which houses the International Youth Library, quite an impressive castle.

After leaving Munich we came through Olching, where there was a classic car festival. I did not get the impression that the organisers appreciated a bunch of 7 cyclists (the magnificent seven) traipsing through and complaining about the stink created by these old cars.

At Fürstenfeldbruck we had lunch together in a restaurant I had seen a write-up about in the paper. After that three of the cyclists (Klaus, Erich and Brigitte) cycled back to Munich, and Angelika and Stefan carried on with us to Merching. After a while in the hot sun we started looking for somewhere to have an ice-cream or a drink, but in the countryside here all the watering holes are closed on a Saturday afternoon, and there were not many to start off with.

The last bit into Augsburg was very pleasant. Phil and I cycled past lake Mandicho with all its windsurfers (Had I mentioned how windy the day was? And of course always a head-wind!), through the woods to the South of Augsburg, very pleasant on a warm, sunny day, and actually passed the world championships canoeing!

After 95 km we arrived at our very centrally located hotel in Augsburg. The evening was spent catching up and reminiscing with my ‚old‘ school mate Heike. It was great to meet up and spend some time getting to know her husband Lex and daughter Maud as well!

It was a great first day, thank you to everybody who made it so special!

Even on a fairly flat day, we cycled 410m uphill.